Why Teach What The School is Teaching?

Children these days are getting so smart. I have been seeing many preschoolers who are academically ready for Primary 1. They can read, spell, add, subtract and some could even do multiplication and division, all under the age of 7 years old. Many would think these kids are gifted, but in actual fact, most of them are not. But they have received the greatest gift. That is, very committed parents who have spent time and coached them well or send them to renowned enrichment centres as early as 4 months old to stimulate and educate.

I don't deny I'm one kiasu parent. From a mother that is all set to teach her kids from birth with Glenn Doman flash cards and achieving academic excellence in the society's eyes, I have evolved to one who believes in providing an environment for the children to learn.

I was so fascinated when I saw babies recognizing words and toddlers adding and subtracting. I thought I want my kids to be able to do that too. I wanted my kids to be more advanced than the average kid. I used to follow the infant developmentally chart closely to make sure my boys' development are in the advanced column. Started doing my a letter a week curriculum with my boys and before I could reach letter Z, they could recognize and read all the 26 alphabets at 20 months old. I could proudly say they know all the basics, Alphabets, Colors, Shapes, Numbers 1-10 before 2 years old. I was pleased with the progress, especially when the learning was done in a very relaxed manner. I didn't even drill them, just imagine the amount of knowledge they could take in if I did, I thought. I wanted to teach them a lot more but I'm often overwhelmed by their tantrums and the responsibilities as their care giver.

Something struck me one day when I was peeping at my boys when they were at their playgroup with my Mum. The teacher was teaching them about the color Yellow and all the children were sitting down listening to their teacher. And there was my boy, playing "swimming" on the floor at the back of the classroom. I was displeased as they were the most attentive when I'm teaching them at home. My mum remarked, "he already know all these, nothing for him to learn."

What my mum said kinda woke me up. If I cover all that's to be covered in school, what's there to learn in school? School would become boring. It may still be alright at preschool level since preschool is still focused on play but it's going to get very boring as they progress to Primary school where they have to sit in front of a board.

I braked. Instead of covering the academic stuff, we did lots of open ended art, outdoor play and reading. There were times when I'm worried if they may fall behind when almost all the toddlers we know are attending enrichment classes of some sort. But my husband, never fail to bring me back to what we believed in. "Time, is what we can give them."
Posted by Renelik at Tuesday, February 28, 2012 No comments:

The boys have been skipping naps. That just means cranky evenings and endless fights. They have been very difficult and humanly impossible to live with. Things worsen when I went away for a one night staycation with my husband for my birthday. It was a great treat, just that I have to face 2 very angry kids who are all out to get back at their Mom for "abandoning" them for 24 hours (for the first time) when I get back.

Today, K got me all worked up when he chose to poo in his pants and refused to go to the potty. I have a raw nerve for that. I lost it and started hurling at him. After I cleaned him up and helped him with his pants, he muttered, "Thank you Mummy". For the first time, I felt so appreciated and immediately following, guilt rushed upon me. Gosh... MOTHERHOOD.

Posted by Renelik at Tuesday, February 28, 2012 No comments:

I'm using Three Character Classics, 三字经 as part of our Chinese Learning Curriculum. I chose 三字经 because it teaches them Chinese history and moral values. This was used to teach young children in the past. There's a story behind each verse and it makes it easier to teach them and let them understand the morals behind the words and stories.

We recite the verse together informally. It's hard to get them to do anything with Chinese. It's a losing battle to get them to sit down to read. So, I do it very casually. But I read from the book, pointing to the words and they will sit beside me sometimes to look. Read with a bit of rhythm so it sounds catchy and they will soon recite together with you.

The video below shows how we recite the verse on an evening, in the midst of some prohibited sofa jumping. After a few sessions, K could memorize the first page of the book. Y, having adverse reaction with the Chinese language could also recite a few verse on his own.

This was a huge achievement to me, for a language that they have been rejecting for the past few months. So, I'm now very motivated!! Being very ambitious, I also started on a reading program called 四五快读 but it was a bad start so I decided to shelf it after the first lesson. More on that in another post.

Here are the materials I used for our Three Character Classics, 三字经 curriculum: 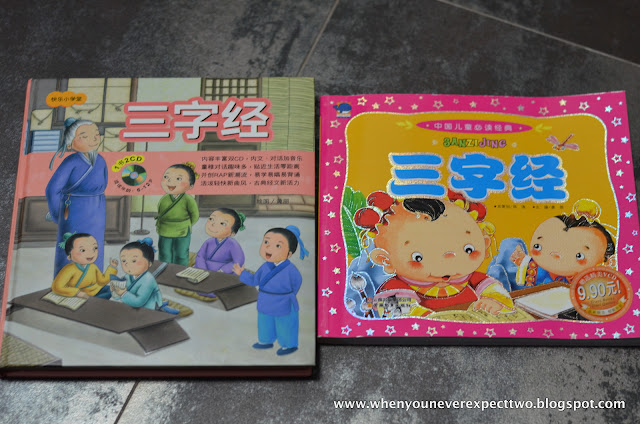 I try to cover the following:

I hope the boys will be more interested in the Chinese culture and history from this.

Posted by Renelik at Thursday, February 23, 2012 No comments:

Chinese is one area that I thought I made the most effort in with the least results. I have been trying my very best to speak to them in Mandarin since birth but their first words were still English and once they became verbal, it was almost impossible to speak to them in Mandarin. I was determined to improve things when I hear the singing accent when they try to speak Mandarin.

Other than trying to speak to them in Mandarin as often as I can, I now try to conduct our activities in Mandarin and do more crafts in the Chinese learning.

On this day, we were revising Chinese numbers 1-4. We did dot painting with cotton swabs on the Chinese characters and they didn't reject the activity like how they reject Chinese books. This is a good start. They normally screamed "No!!!" when they see me with something Chinese, especially Y. 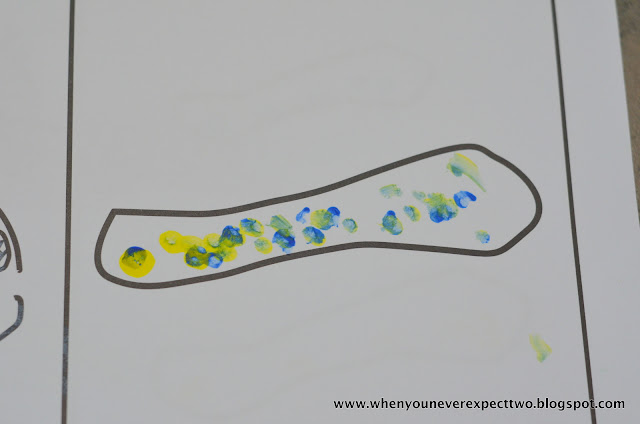 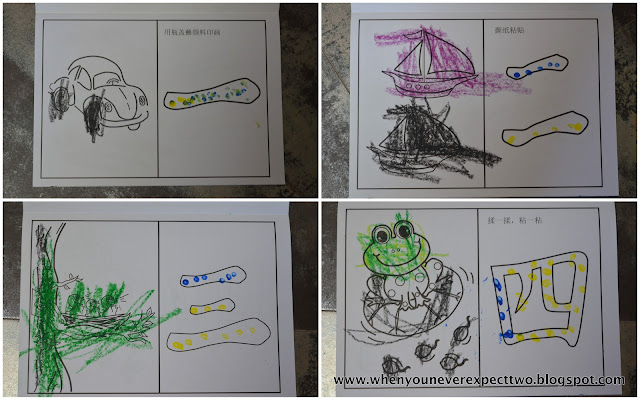 Posted by Renelik at Tuesday, February 21, 2012 No comments: 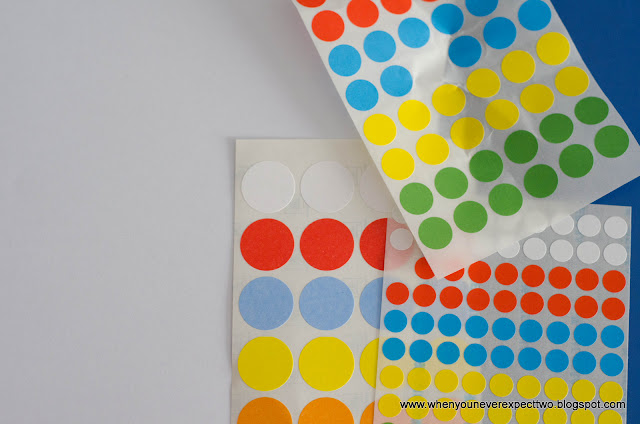 Read about Pointillism art in one of the art books the other day and got me very interested in Dots. And that made last week a week of Dots and the first dot related activity we did was just making patterns freely with circle label stickers that are easily available at stationery stores. I got all the sizes available and I like the vibrant colors they come in.

In this activity, they...
And it was a lot of fun... all under the cost $5 for all the pretty circle stickers. 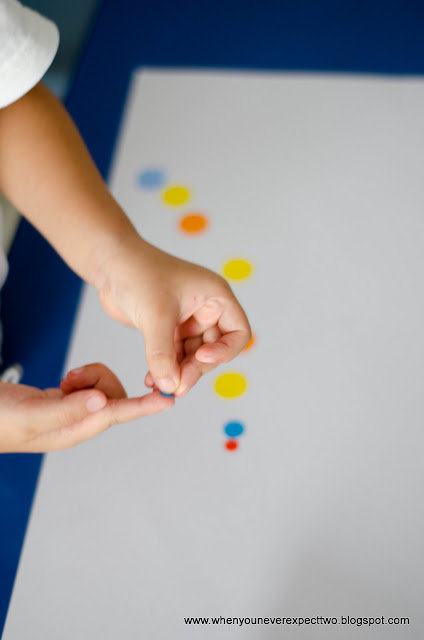 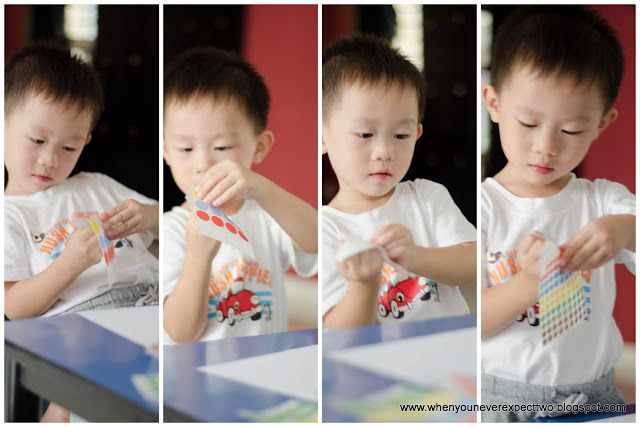 Most toddler loves water play but as my boys are very cautious children, they are wary of public places like a water playground where there are lots of children running and splashing. The Splash Park at Sembawang Shopping Centre is the one we go most often as the crowd is not as bad as other playgrounds.


On this day, they were harrassing us to bring them to the swimming pool but we were low on energy and a water playground seems to be a good trade. Y is more comfortable with playing with water while K does not like water getting into his eyes very much. It's easy to see who had a better time from the pictures below. 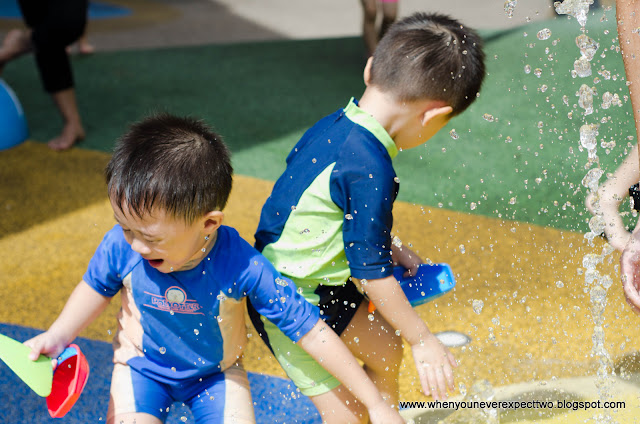 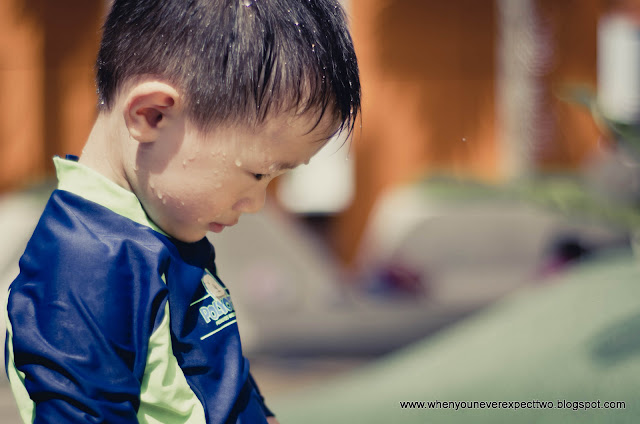 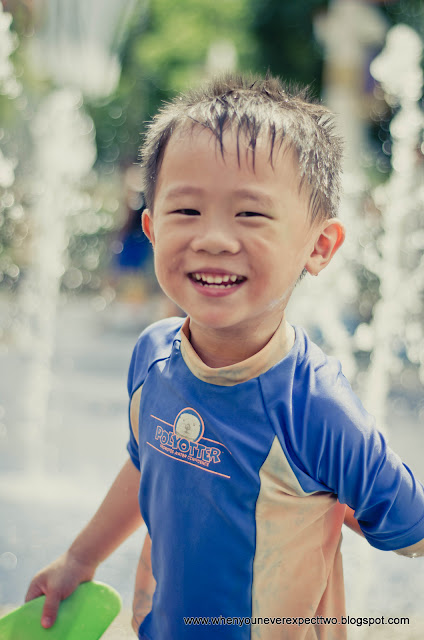 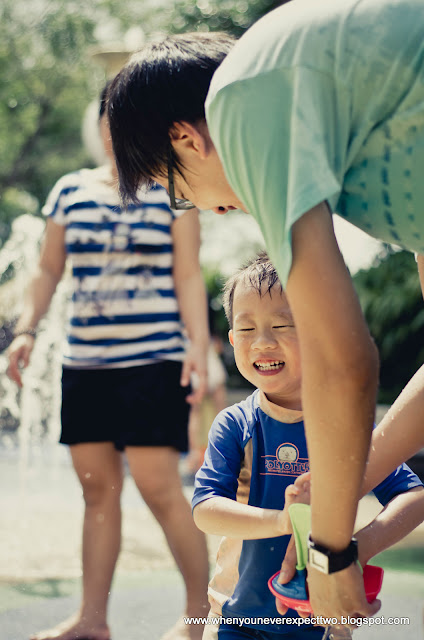 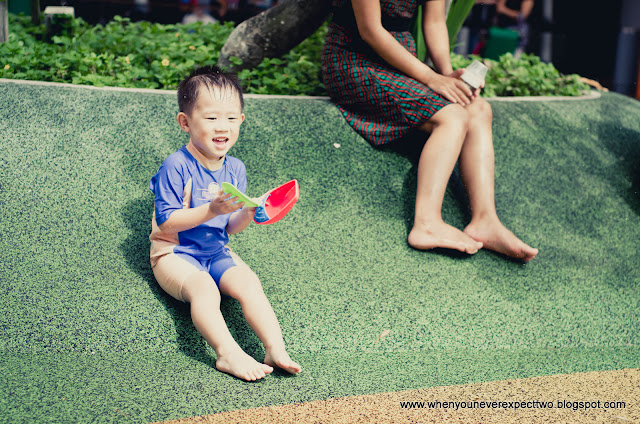 The Splash Park is located at Sembawang Shopping Centre and it's opened from 11am-2pm and 5pm-8pm. There is also a sheltered dry playground and it's a great bad weather back up.

Posted by Renelik at Thursday, February 16, 2012 No comments:

Email ThisBlogThis!Share to TwitterShare to FacebookShare to Pinterest
Labels: Out and About, Waterplay

Can 3 years old feed themself independantly? Yes and no. I'm so tired of feeding them but I'll be more tired cleaning up after them if I let them feed themselves.

This is the dilemma between letting them feed themselves, takes longer, eat lesser, more mess vs feed them, finish faster, eat more, just more effort on my side. Mess is always on a greater magnitude when you have twins. The thing is, if I don't let them practice and bear with the mess, we'll never get there. Or we'll eventually get there but maybe much later. One thing for sure, if you let them eat something they love on their own, like Yogurt, the mess is very manageble.

Well, no pain, no gain. Until I'm ready to counter the mess, it's just Yogurt for now. 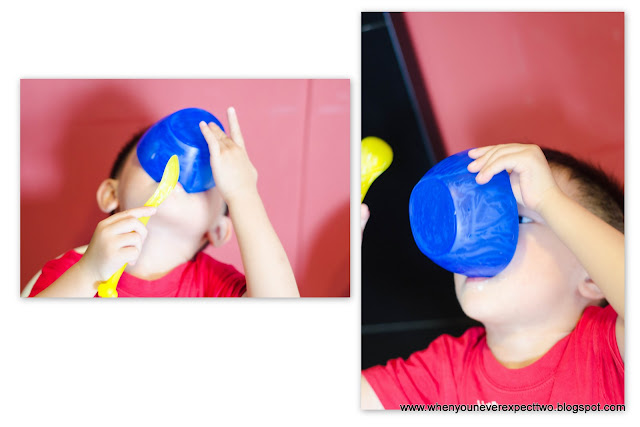 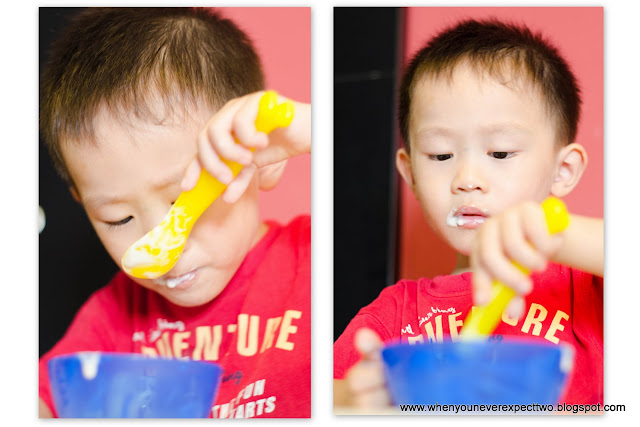 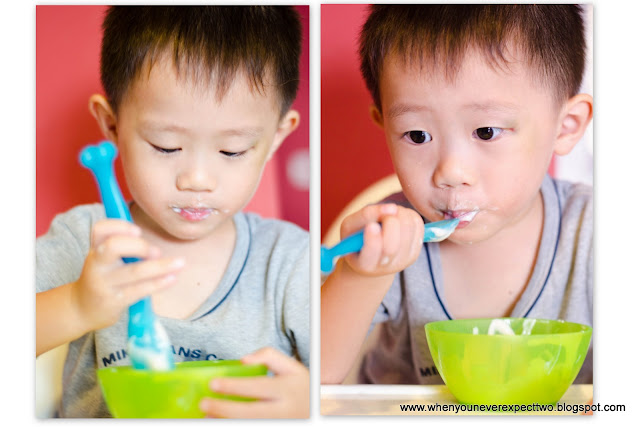 Posted by Renelik at Wednesday, February 15, 2012 No comments:

The start of the year is always a time for reflection and I've been holding on to the activities I have planned for them and thinking what is my directions for them and also letting them adjust to their new school. After putting in a lot of thought, our focus for 2012 for them is still providing lots of outdoor play, open ended art and lastly and most importantly, Chinese!! More on Chinese learning on later posts but let's see what we have here today.

My boys love painting. I found them a school that does a lot of painting but they don't seem to have enough in school. They still ask to paint when they come home. There are times when I'm totally lazy to clean up and was even guilty of dissuading them! But most of the time, I try to oblige and will try to add some twist to their regular painting sessions to keep the interest going.

I provided them different surface to paint and also different materials for them to paint with.  The most interesting material for them today was the craft beads and they enjoyed adding them to their masterpieces. 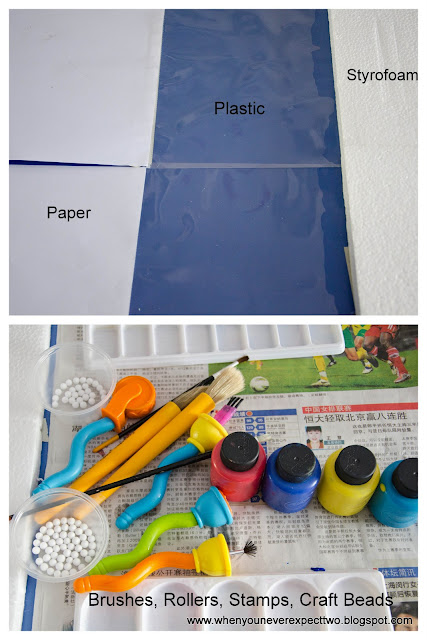 They started painting on the white paper only and didn't touch the plastic and styrofoam at all. It took a bit of encouragement to get them to paint on other surface. Hmm.... I should provide them with more variety of painting surface. Once they get used to the idea that they can paint on other surface other than paper, they were happily exploring around and Y did a nice piece of work on his styrofoam board. I hung Y's styrofoam board and K's paper pieces on our "wall of fame" but Y insist that his brother's styrofoam art should be hung too. So, there they are. 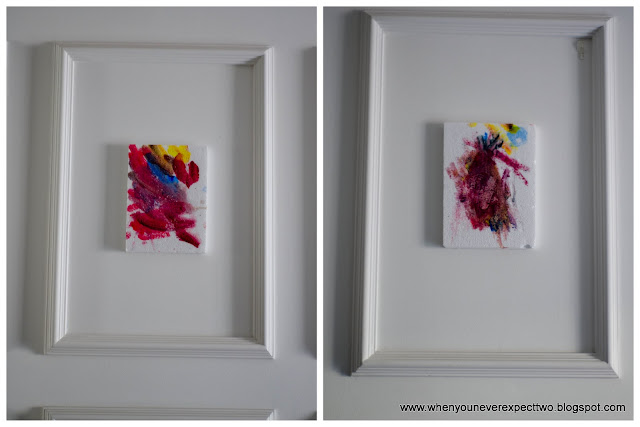 Posted by Renelik at Wednesday, February 08, 2012 No comments: 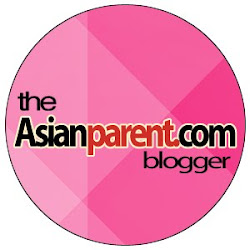